When we first got chickens, we didn’t have a clue. I’d read all the books and learned what seemed important. But as with so many things in life, you can never learn everything ahead of time There’s always more to understand along the way. We figured we’d learn as we went, which is my favorite way to do anything anyway.

We drove down to Wilco (which, for those of you non locals, is a farm store) and let the kids pick a few different colors from one of the chick bins. We told the employees this was our first time, and asked if they have any advice for us, but they said “No, not really. You’ll be fine.”

Awesome! And we were. Totally fine. The chicks were loved and adored and played with and given names. The kids called the brown ones things like “Brownie” and “Chocolate”. The white ones were “Marshmallow” and “Snowflake”. Friends came over to hold them and play with them. They were the most adored chickens ever.

The chicks grew into teenager chickens and and were escorted out of the garage into the wild blue yonder of our backyard. They were thrilled – or at least I think they were. It’s hard to tell with chickens.

The kids would go outside to play with them and to give them treats like mealworms. It was idyllic. We paid a lot of attention to those chickens. 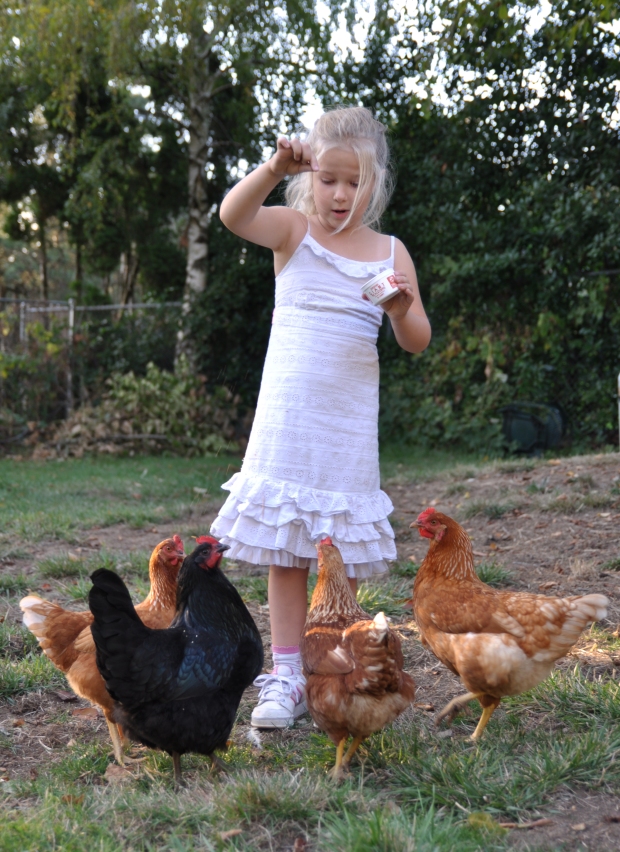 My daughter started to get annoyed with a few of the birds. They’d chase the other chickens, jump on top of them and in her words be aggressive & bothersome. In fact, she changed their names from Marshmallow & Snowflake to Aggressive White and Bothersome White.

And the noise they made! Sheesh! I’d knew that roosters would crow, but we were pretty sure these were all hens. They all looked like hens. In our yard you could hear a chicken crow at all hours of the day. I figured it was just one of those things that was different in real life than the way it was in the books. All chickens crowed, and they crowed all the time.

At the time, my daughter was reading a Nancy Drew book she’d brought home from the library. I think she’d picked it because it was about chickens, too. Nancy Drew and her baby chicks. I thumbed through it one day and noticed that they even had the same kinds of chicks that we bought – Sex Link. Such a weird name. Until I read the next paragraph – Sex Link chickens are engineered to be colored by their sex. !! Brown ones are hens and white ones are roosters.

Ohmyword, we did have roosters. No wonder! Why in the WORLD did Willco not tell us this?? Why did it take Nancy Drew to fill us in on our chickens?? They looked the same as the others – no rooster face, no rooster tail feathers. Apparently they get those a little later in life.

Now that we knew, everything made so much sense. Their behavior, why they acted like the bosses of the yard, why they appeared to be aggressive and bothersome to the chickens…it all became clear. These were roosters and roosters behave differently than chickens. They’re supposed to. They’re roosters. If a chicken acted like a rooster, it’d be weird. Weird enough that they’d get their name changed. But when a rooster does it, it’s expected. It’s understood. And if for some reason the rooster started acting like a chicken, we’d think that was weird.

I was telling this story to a friend recently and it occurred to me that some of this can apply to people too.  Not in a male/female stereotype way (where it kinda feels like I’m going, right? Nope.) In a knowledge and understanding kind of way. A little knowledge can be magic. Especially, for me, when it’s social & personality knowledge.

Before I knew that I was an ambivert, or that I had strengths in activation & achievement I just felt like I was a little weird. Mostly I felt inconsistent, impatient and task oriented. These weren’t exactly qualities I was proud of. Now that I have a names for myself, now that I can recognize myself in these titles, I get that I behave differently in different roles, that I’m great at getting things started and that I get things done. These are things I like and value, and these are things I can work with. I don’t get annoyed with myself that I’m behaving differently than everyone else. I get why I’m doing what I’m doing and I get on with it.

Before I knew about habits – how strong they are, how important they are – I’d beat myself up for doing the same exact thing every afternoon, no matter how strongly I had told myself things would be different the night before. Now I can recognize the cues that get me started on the habit and now I can understand that it’s not just that I feel like I’m autopilot and not thinking about my decisions – I really truly am. Now that I know the habit, I can alter it. I can tweak it to make a new routine automatic. One that I actually want.  I can work on changing my reaction to the cue, take it out of automatic mode and make adjustments that work for me.

Before I knew my husband has strengths in deliberation, I’d get so dang frustrated that he wouldn’t just answer me. I’d ask “How does this look?” And he’d look and look and you could see him thinking. That was enough for me, I just knew he was trying to think of a nice way to say it was hideous. Once I understood this was him being deliberative, I had the patience to wait for him to say what he was thinking instead of just assuming the worst. He honestly didn’t know how it looked yet. He was still thinking about it. He wasn’t trying to spare my feelings, he was deciding. Oh.